I expected to have a lot more to say about Dragonsdawn when I finished but I find myself grasping for words. There was actually a lot I wanted to discuss but somehow that words slipped out of my head when I wasn't paying attention. Over my long weekend, camping and going to an anime convention, I managed to finish the novel over the course of several early mornings. I had planned to do two separate posts but I've decided instead to combine the rest of the book into one final post focusing more on my final impressions and less on the gritty details of the book.

Dragonsdawn, like many good books I've read, strikes me as ideal material to create a movie from. It has a wide cast of bold, vibrant, and most importantly, human personalities that demand real acting. It has detailed reference material for creating scenes and props, an epic sprawling world, and events and catastrophes on a such a vast scale that it demands the viewer's attention. Considering that the book was written in the year I was born I'm surprised that no one has made a notable attempt at a big-screen adaptation. On the same note, however, it's probably also a good thing that it hasn't been done yet as CG technology has only recently gotten good enough to really do the world of Pern justice. Still, that said I'd really like to see a movie adaptation of Dragonsdawn, not because I think that a movie could do better, but because the story is already told so well that the only real way I can think of to improve upon it is to add a visual element.

Speaking of which, for those of you who read my last post you'll know that, even for a title like Dragonsdawn, the book is essentially sci-fi. The few fantasy elements that do trickle into the story at the end are glaringly fantasy, but in the end account for such a small part of the story that it blends into the background. For the most part the world is so well constructed and plays by the rules of reality so much that you could actually imagine the events occurring given another hundred or more years. For a story that does indeed get something akin to a dragon (I'm not spoiling much, it says it right on the back cover), and indeed uses the dragons as a major selling point, they don't have a huge impact until the end.

And speaking of having a huge impact the story killed off one of my favorite characters! I should have known better. This is one of those books where, yes, people die from time to time but it's rarely a main character. And if it is going to be a main character it's going to be someone you really really like. That's what kind of a story this Pern novel is. There aren't many stories that have the guts to, er, gut one of the more beloved characters, but Dragonsdawn is one of them. Dragonsdawn doesn't even have the courtesy to kill off my favorite character in the first or last third of the book like most stories. Nope, instead they die right in the middle of the story. Just the right point in the story to annoy you for the entire last half of the story. *sigh* Come to think of it, the only other character that died that actually surprised me was killed off at nearly the same time. However, I wasn't nearly as upset with their death, although the way they died was undeserved. 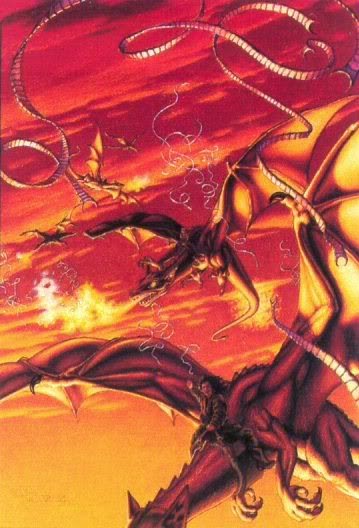 My last thoughts about the book? I'd recommend it. Anyone who likes a bit of sci-fi or fantasy would like the book. Even if Dragonsdawn is more sci-fi it certainly has a fantasy kind of feel to it. Anyone in the mood for something a little different but well-crafted might also find pleasure in Anne McCaffrey's best-selling novel. For myself, yes, I can definitely say I enjoyed it, and to a certain extent I look forward to seeing how the Pern novels continue but I also feel a certain trepidation about starting the next book. Dragonsdawn is so good a being what it is that I worry that subsequent works might actually detract from the story and the world. I won't know until I read on, but there is still that stigma of the middle-movie that rings true to a slight extent for books as well. Then again I have also seen, in equal measure, book series that start off with a painfully slow first book and rocket into mind-blowing territory as soon as you pick up the next book.

So, with my first foray into the world of Pern over I will be taking a slight detour to take care of some unfinished business. I have yet to finish the Harry Potter series; that massively popular series of critical acclaim that pretty much everyone who reads has read thrice-over by now has somehow gone unread for all these years. Not completely unread mind you, I've been reading them on and off since I picked up reading again after a long hiatus during my Somerton years. So, I will be picking up with Harry Potter and the Half-Blood Prince, which I have heard from many is one of the best books in the series. Well, time to expand my horizons again. Book three is officially started.
Posted by fatalerrer at 7:24 PM