No Book Unread Project 1st Anniversary! - A Self-Review by the Numbers

Just shy of a month ago No Book Unread Project turned one year old! On July 23rd 2014 I was sitting in my garage (enjoying the weather from the shade) wondering what the hell I should do to get myself to read and write more. Then, as now, I was being a lazy sod scribbling madly in a fit of genius when my little idea came to me the heavens opened up bathing me in rays of light filtered through the clouds and heard distant music. I wrote my first post the same day. Same as then I am writing, once again, from my garage. It seemed fitting.

So, I suppose my first real review question should be has No Book Unread worked out like I planned? To which I have to say, yes. I'm still writing at this very moment. Despite the fact that I stopped writing for a few months in the long term I have continued to read and write. NBU has given me a reason to stay focused and served as a reminder when I slacked off for a long period of time. Despite my glacial reading pace I've managed to read 14 books so far. That may be a drop in the bucket for some, but for me it's the most I've read in a long time. Arguably I haven't finished this many books in a similar time-frame since middle school. Now that's progress. (On the other hand something went terribly wrong along the way if you are indirectly competing with your junior-high self.) While at the rate I'm going I'll probably finish up my reading list under the rule of our eventual AI overlords I'm already noticing some improvements. What I'm curious about though is: Have you, my dear readers, noticed any change in my writing over the last year? Feel free to be completely honest, I won't even cry. (Okay maybe a little.)

Now I get to rattle off some statistics since I'm a nerd and love these things. Despite starting in the middle of 2014 I'll be listing the books I've managed to get through by year. Considering my six month hiatus 2015 should be relatively comparable so it will be interesting to see how things measure up. In 2014 I managed to end the year with a total of 8 books while, to date, I've only managed to finish 6 so far this year. Of course, the year is yet young so I'm hoping to beat 2014 by a good margin. I should probably set some reading goals next year but I'm still pretty bad at estimating how consistently I read. Hell, I might as well set a reading goal for the rest of 2015 while I'm thinking about it. So let's say, hmm, 15 total for the rest of this year. After all I managed to finish 8 in roughly the same time last year so let's try and up the ante, eh?

Next up we have oldest and newest books. In 2014 I happened to read the oldest and newest books back to back, pure accident. Dog On It copyright 2009 was followed up by Dragonsdawn which happened to come out in 1988 making it as old as I am. While so far this year Moving Pictures, a Discworld book is the oldest at 1990. While I haven't reviewed it yet The Wayward Irregular is by far the newest book I've read in a while as it came out in 2011. I suspect it will probably win out for newest book by the end of 2015 because there aren't many books newer than that in our collection. There are still a number that are older than 1990, however, so that one could be anyone's guess.

Last I have total page length, my favorite, to wrap our little statistics session up. Last year most of the books I read averaged out to about 300ish pages, just scanning over the list. As for the actual average...let me do a bit of math. Hang on a sec. ....there. Okay, so the actual average is  a mean 398 pages. By far the heaviest hitters were Harry Potter and the Half Blood Prince and Harry Potter and the Deathly Hallows at a monstrous 652 and 759 pages respectively. Those are the kind of page numbers that can end in a concussion if you fumble these books off the top shelf. Meanwhile Managing When No One Wants to Work brought up the rear with a meager 157 pages. If you add all of 2014 up you're looking at 3,181 pages! Moving on to this year The Wayward Irregular narrowly winds up on the bottom with a modest 227 pages, while my other as-yet-unreviewed book The Briar King is the current contender for the top spot of 2015 with a sizeable 584 pages. I mean, it's no Harry Potter but that's still quite a few turns of the page. Now, the final numbers for 2015 are still up in the air but the preliminary stats for 2015 are an average page length of 371 and a total of... a total of... Oh COME ON. 2,223!? Man, that is so unsatisfying! I could have ended up with a nice pretty 2,222 but no. I just had to read one more page. If I had known that I would have torn out a page in the middle somewhere. Haha, no, no, just kidding, that's blasphemous. Get out of here you heretic.

Well, now that I've bored and/or thrilled you with my statistics and meanderings I have one favor to ask. While for the first time since I've started NBU I have a backlog of posts to work on I'm also no longer reading anything. Since I was so callous as to avoid reading anything that my lovely wife Jennifer has really wanted me to read I asked her to select three must-reads. This is where you come in. I need your help choosing which of the following "must-read" books I'll read (next) so I'm putting it up to vote while I work on my Briar King update.


Cleric Quintet: A typical D&D style fantasy by R.A. Salvatore focusing on the unlikeliest of heroes, a cleric. The same author who writes about Drizzt.(The author behind Homeland, Exile, and Sojourn) Since it's by Salvatore it's probably good.

Way of the Shadows: First in a trilogy about an assassin. When Jennifer first told me about the series I jokingly said "I bet it's called 'way of the shadow' like every other stereotypical assassin type thing". Go figure. It's supposed to be good though. Also, strangely enough my mom has read this series. O.o

The Last Dragonlord: I'm gonna' say fantasy, just guessing though. I mean it's got Dragonlord in the name, so I'm assuming there will be dragons. Oh, and it's part of a trilogy. This is another one of those fantasy series like Dragonlance that is supposed to be mind-blowingly good. 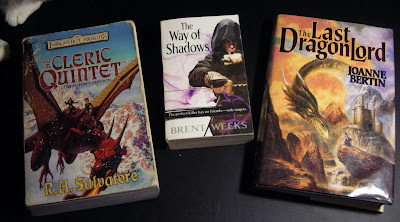 **BONUS**
Here's some hastily compiled data on my own posts! 'All Things Come to An End'  is NBU's longest post at 2,484 words. No other post comes close except for the much more recent 'Quiet On the Set' with 2,221 words. No other post breaks the 2,000 mark, although 'The Non-fiction Addiction' comes absurdly close with 1,999 words (not including the large quoted passage at the end). 'All Things Come to An End' and 'Quiet On the Set' are the longest posts for 2014 and 2015 respectively.

Not including my non-book posts my shortest post was my very first review post: 'Gone to the Dogs'. It only makes sense if you think about it. That also effectively makes it the shortest post of 2014. The follow up posts to Dog On It make up the 2nd and 3rd shortest posts for 2014. The shortest post for 2015 was 'Learning From the Masters' (6th shortest overall).